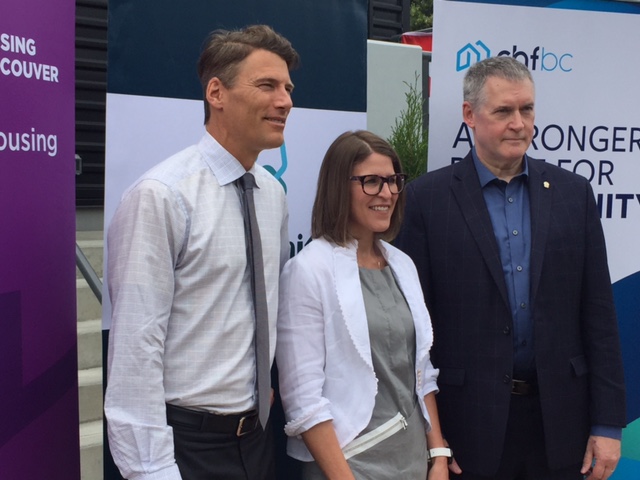 Partnership with City of Vancouver will soon add more than 300 affordable homes at Fraserview sites VANCOUVER, BC (July 9, 2018) – The Co-operative Housing Federation of BC (CHF BC) and the Community Land Trust (CLT) are pleased to announce the launch of Vancouver’s newest co-op housing development. The CLT’s presentation centre at 2910 E …

VANCOUVER, BC (July 9, 2018) – The Co-operative Housing Federation of BC (CHF BC) and the Community Land Trust (CLT) are pleased to announce the launch of Vancouver’s newest co-op housing development. The CLT’s presentation centre at 2910 E Kent Ave S is now open and accepting applications for the first 90 affordable homes in Fraserview Housing Co-operative. The homes will be ready for move-in later this summer for people who live and work in the city. This is the first of Fraserview’s two phases in Southeast Vancouver’s River District, which will provide a total of 278 homes when completed later this year.

Built on City-owned land and leased for 99 years, Fraserview’s new permanently affordable homes mark a significant development in the partnership between the City of Vancouver and the community housing sector. The modern two- and three-bedroom townhomes and apartments, alongside the shores of the Fraser River, will add to the City’s scarce supply of housing targeted to moderate-income families.

“We have been waiting to celebrate the opening of Fraserview Housing Co-op for some time,” said Thom Armstrong, executive director of CHF BC and the Community Land Trust. “This is an example of what the City and the community housing sector can accomplish when we work together. We’re excited to meet the first families who’ll be moving into Fraserview, and we look forward to many more celebrations like this in the coming months and years.”

“It’s a big win to open up new, much-needed co-op housing for Vancouver families at below-market rents,” said Mayor Gregor Robertson. “Vancouver is leading the region in boosting the supply of new rental housing and with Community Land Trust we’ll deliver over 350 affordable homes at three different sites. We are focused on providing the right supply of homes for Vancouver residents and co-ops are a great long-term housing option for people to put roots down in our city.”
This development is the result of a multi-stakeholder collaboration that demonstrates the tremendous possibilities for affordable housing when municipalities get creative in their use of land. The community land trust model is the ideal vehicle for mobilizing public and private assets to provide a direct, lasting benefit to the community. Partners in the development include CHF BC, CLT, the City of Vancouver, BC Housing, New Market Funds, Vancity, Fraserview Housing Co-op, Sanford Housing Society, and Tikva Housing Society.

In total, the CLT development includes 358 permanently affordable homes. The 90 townhomes and apartments being celebrated today make up the first phase of Fraserview Housing Co-op. They will be home to 90 moderate-income families with housing charges ranging from $2,050 to $2,700 a month. Fraserview’s second phase will include 188 apartments in two towers under construction at SE Marine Dr and Jellicoe. Phase 2 will serve the broadest spectrum of individuals and families, including many who will be paying the provincial shelter rate of $375 a month. Thirty-two more townhomes are under construction directly in front of the Fraserview towers. These 2, 3 and 4-bedroom townhomes will be operated by Tikva Housing Society for low-income families. The BRice, a 48-unit apartment building at 1710 Kingsway, is already full occupied. Operated by Sanford Housing Society, it serves low- to moderate-income individuals, half of whom are living with a mental illness and also paying the provincial shelter rate.